Gail Collins
” The work-family divide is the biggest issue for American women. But in some ways it’s amazing how adjusted society has become to it. In the 1970s, as women began to take more jobs, society was reeling. “

” Women are needed in the military because there aren’t enough soldiers, and we’re seeing more women serve. “

” Women in America will have to find an answer for the pressures of work and family, but if you really care about women’s issues you have to think about women in the world, especially Africa, Asia and the Middle East. “

” When I started giving talks about women’s history, one of the things that bothered me was the tendency to say, ‘Well, everybody was totally oppressed and suddenly in 1964 we rose up, got our freedom, and here we are.’ It dismisses the women who fought for rights for several hundred years of our history up to that point. “

” When the women’s movement began, it was a middle-class phenomenon. Certainly, black women had other stuff to think about in the ’60s besides a women’s movement. Working-class women were slow to get into it. “

” The economic sense of possibility was so great when I was growing up that my parents had no question that I could do anything I wanted to do, even as a girl. I’ve always believed that the economics of a story intersects with the women’s story – that stuff often happens at the time it happens because of the economy. “

” You hear younger women say, ‘I don’t believe I’m a feminist. I believe women should have equal right and I believe in fighting for the rights of other women, but I’m certainly not a feminist. No, no, not that!’ It’s just a word. If you called it ‘Fred’ would it be better? “

” In the 1960s, you had this booming economy, and you didn’t really have enough men around to fill all the jobs. So there was this sudden demand that women come back and perform a lot of the white-collar and pink-collar roles that men had done before or that hadn’t existed before. “

” The one big, humongous, immense thing that we didn’t change, that we didn’t figure out how to deal with is, if men and women are both going to work throughout their lives, who’s going to take care of the kids? “

” Sarah Palin is an heir to the women’s movement. She has not been constrained by gender. At no point in her life has she thought, ‘I can’t do that because I’m a woman. “

” There are lots of reasons for that gap between men’s and women’s wages but to me, the big one is the work-family issue. Trying to juggle children and a job is tough under any circumstances, but especially if you’re shooting for the kind of career that involves long hours at work and being on call 24-7. “

” When the women’s movement started in the 1960s, there was a vision of a future where women didn’t wear makeup or worry about how their hair looked, and everybody wore sensible, comfortable clothes. It ran into an absolute brick wall. “

All 12 Gail Collins Quotes about Women in picture 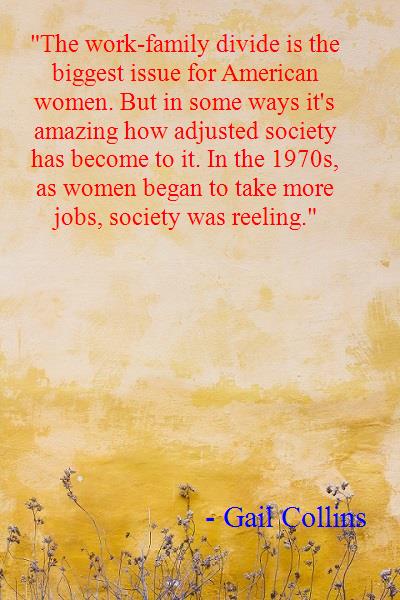 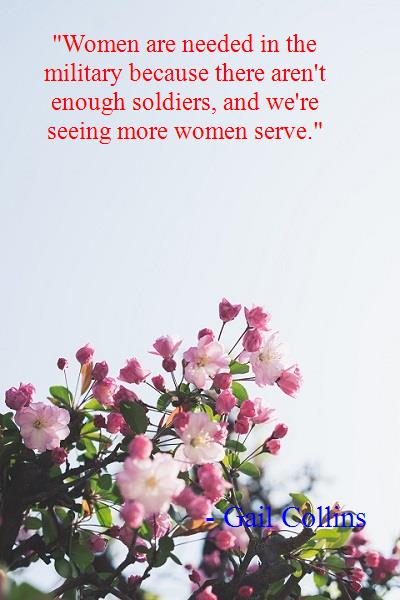 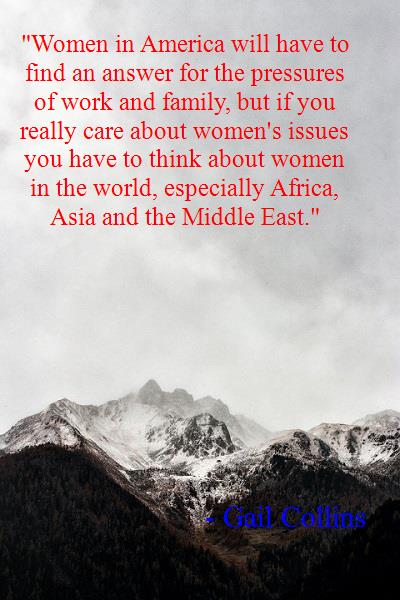 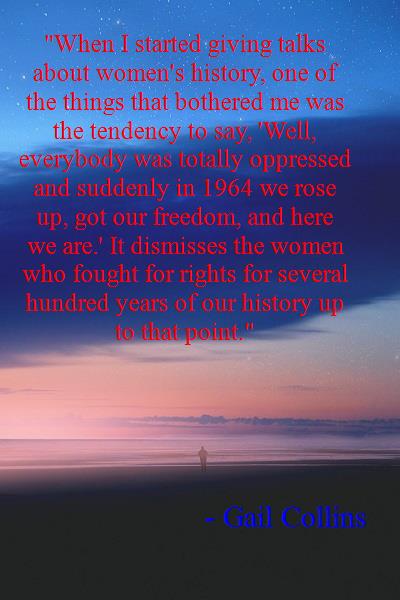 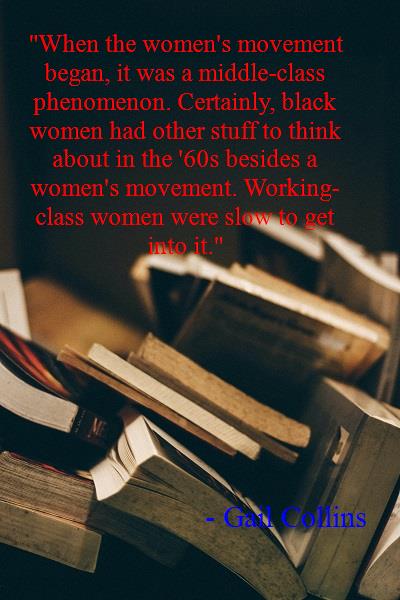 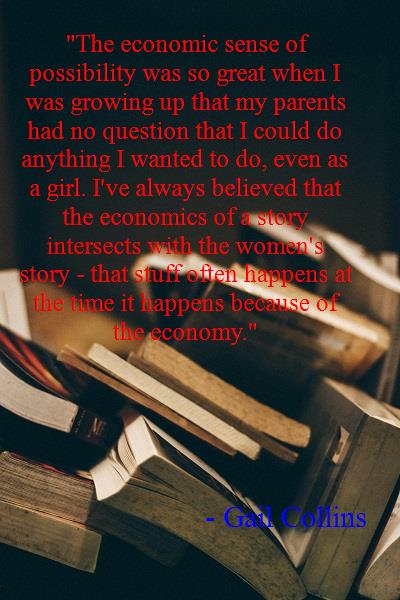 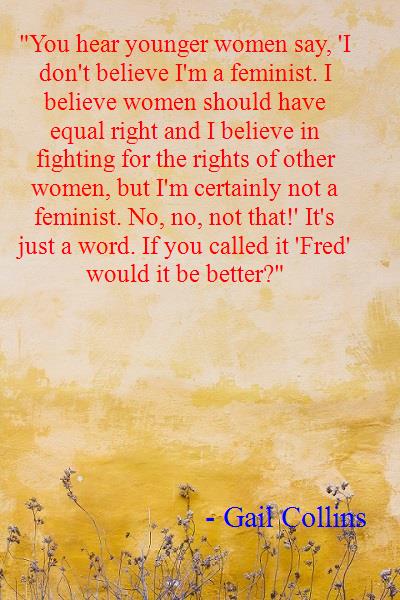 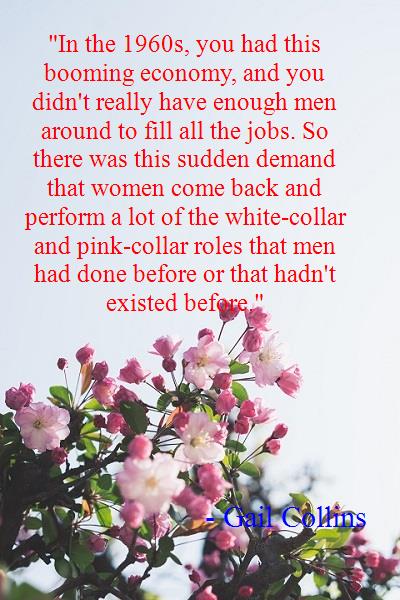 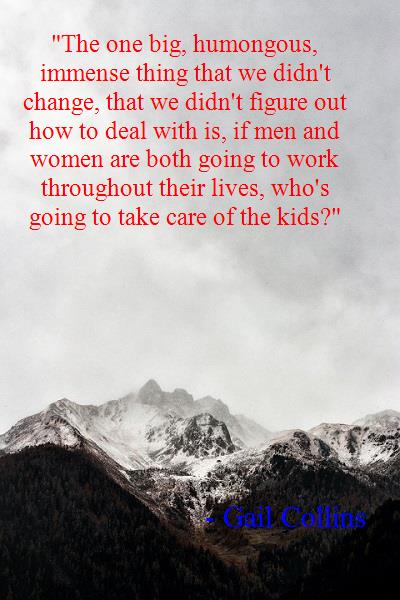 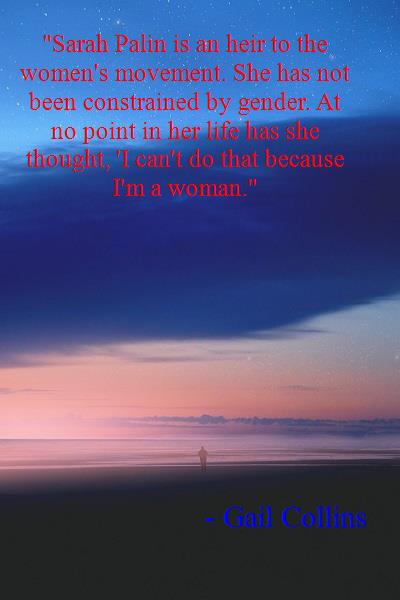 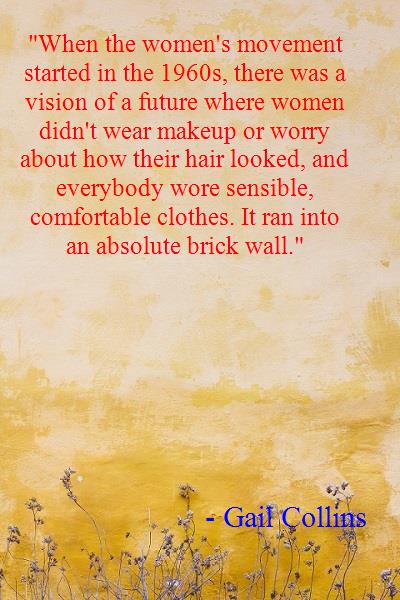